Our Story (The Two Ahmeds)​

Gaza Ambassador began in 2013 as an initiative of the Two Ahmeds, Ahmed Mansour and Loai Ahmed, college students attending Gaza University. In the midst of their war-torn homeland, they saw the
need to create, not just restore and rebuild. They wanted to ignite the vimaginations of young Gazan artists and create a parallel universe of promise and hope. It was called “Peace Message” and it became the largest art exhibit ever witnessed. Thirty Artists from all over Gaza Strip participated with their feathers, pens, and wood style of work. It was so successful that it inspired a bigger and even bolder Peace
Message II. As curators, Gaza Ambassador helped discover amazing new talent, giving them a platform to speak to the world.

Now the Two Ahmeds have transplanted their Gaza Ambassador work to the USA working under Filisitia Films in partnership with the Museum of the Palestinian People in Washington D.C. From the nation’s capital, they are launching new art exhibits and touring and educating the American community about what is going on in Gaza strip. Through art, film, stories, dance, and food, they are truly Gaza Ambassadors, sharing the richness of Gazan history and celebrating Gazan culture. At a time when tensions in the Middle East are getting worse and the Palestinian Embassy in DC has been shuttered, Gaza Ambassador is building an embassy made not of bricks but of people and connections like you across the world. Day by day, GA is moving that parallel universe of promise and hope, created by a new generation, one step closer to reality. 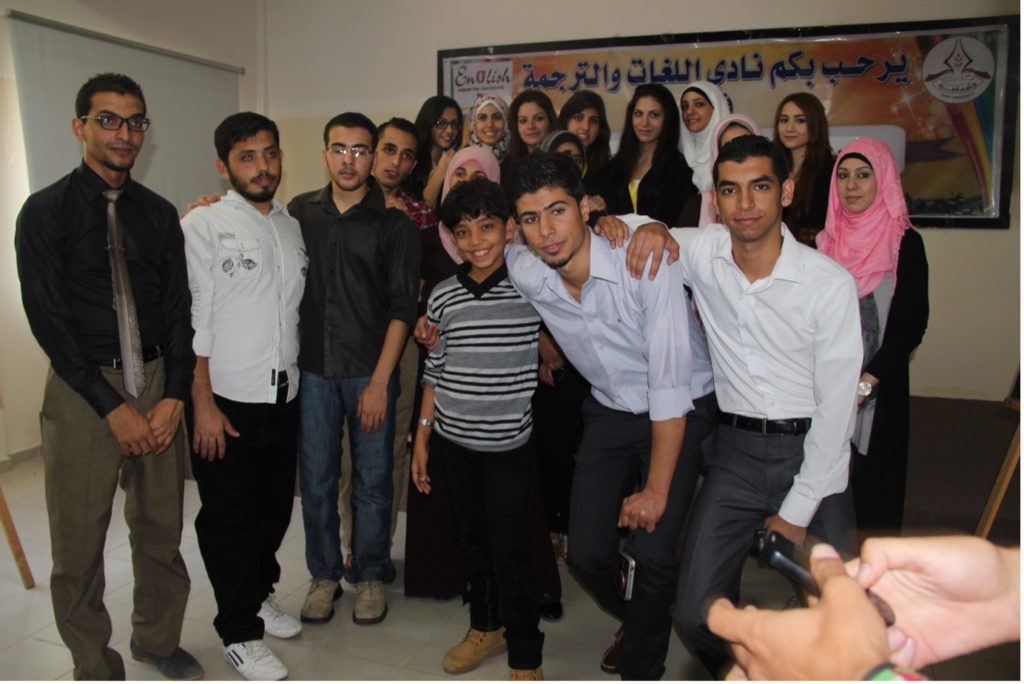 Gaza City has represented itself through the symbol of the Phoenix for thousands of years. The bird historically represents the multiple rebirths of Gaza on the same location over the past 5,000 years. Today as Gaza enters its sixteenth year living under siege, this symbol is even more powerful for how it speaks for the one million children of Gaza. Five wars since 2008 may have left them victims of the cruelty of their oppressors, leaving scars of fear and trauma. Yet, that has not destroyed their innocence or their humanity. They rise just like the Phoenix.

Gaza Ambassador invites you to “Dreams Rising” to imagine a better future for Palestinian children in Gaza. When you live in what has aptly been described as the world’s largest open-air prison, you understand why imagination has an added force. In this haunting exhibit, these children of Gaza are inviting all of us to imagine the impossible. Imagine FREEDOM! Imagine PLAYING SAFELY. Imagine being treated as a HUMAN BEING. 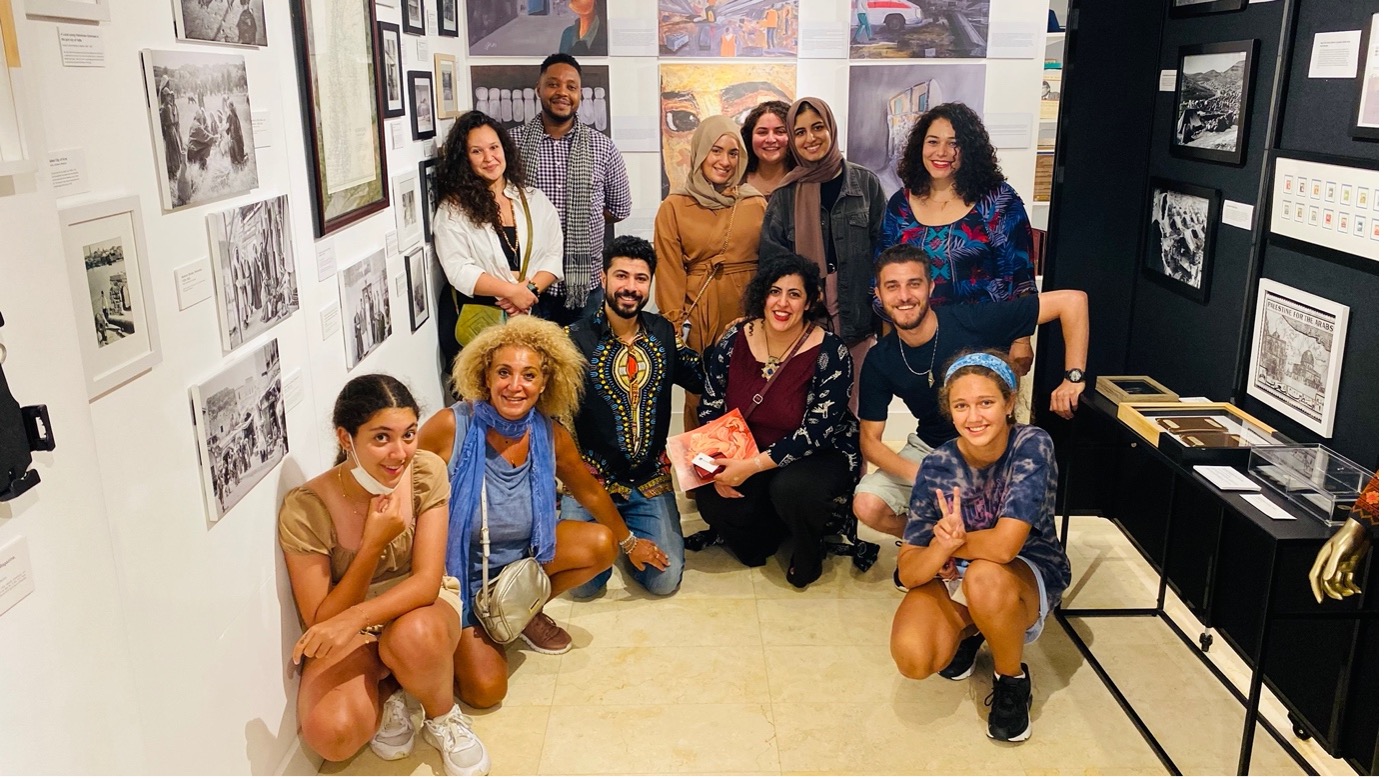 The whole idea of hosting a Gazan children’s art exhibit in 2022 was a dream, given the obstacles left over from the last two wars, and given that in the past, such exhibits have been banned or shut down. Yet somehow, Gaza Ambassador’s curators managed miraculously to get the paintings out and to the USA.

Working with a team of youth specialists led by Ga’s field producer Abedazim Herbawi, curators Ahmed Mansour and Loai Ahmed asked children to paint a vision of their future. What they created is a stunning alternative reality that is so compelling, its images will work their way into your heart as well as your mind. Their moral imaginations are clear, unstained by cynicism. Be prepared for the children’s images to confront you. We ask ‘why” but they ask, “why not?”

This Art Exhibit, created by Zainab Al-Qolaq, tells the story of the death of her family and of her own war injury. Zainab is a young artist from Gaza. In 2021, she was preparing for her final exams prior to graduation and had just turned 22, an age that should represent the budding joys of adulthood. But 22 takes on a much darker meaning for her. It is the very same number of family members that she lost through the war of 2021 on Gaza Strip. 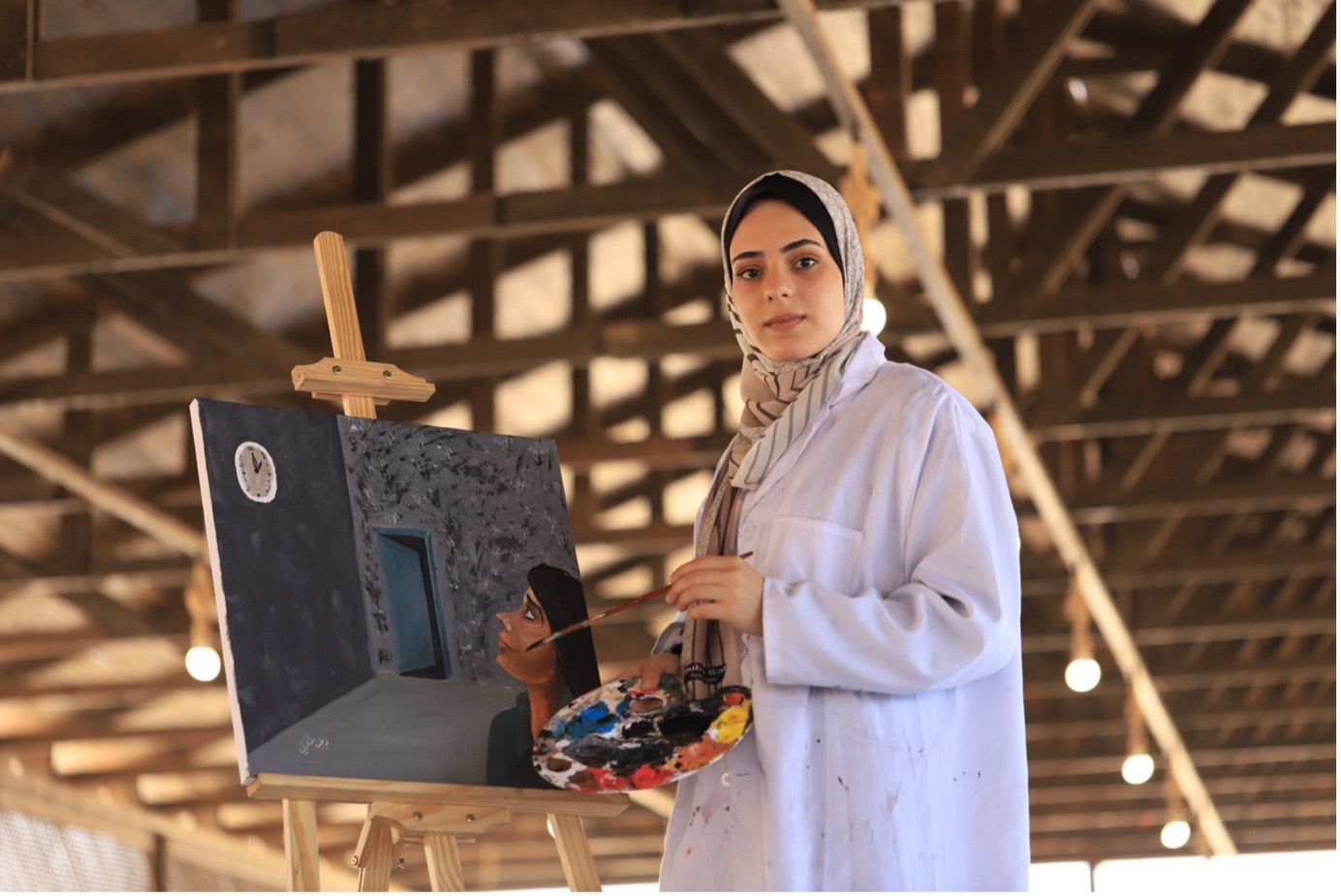 The story she tells begins under the rubble of the destroyed apartment in the center of Gaza City, Al-Wehda Street, bombed without any warning. She was there with her family. The Israeli attack lasted for just a few minutes, but it killed 43 people. 19 of them were children. 14 were women, and nine of them young girls. Most were on the lower floors, where they huddled, believing that the floors above them would protect them, and this would be the safest place to shelter. Those floors collapsed on to them.

Zainab remained trapped for 12 hours during which she struggled to breathe. The only way Zainab was able to communicate with rescuers was through her phone—which remained in her hand all during the bombing. When its battery finally ran out, she had to scream for help for hours until she was ultimately rescued. By then, she had lost her voice. All she could think about was “Is everyone else alright?”

Later that same night, Zainab was told the news. She had lost 22 members of her family including her mother, her only sister, two of her brothers, and many other uncles, aunts, cousins, and grandparents. In a blink of an eye, over half her family were wiped out. Though injured, she survived alongside her father Shukri, her brother Osama, and 10 other relatives.

A year later, through this exhibit, Zainab has found her voice.  Through her art that is like no other, she seeks to reclaim her memory of lives lost.  By linking each year of her young life with the life of one of her beloved family so senselessly lost, she measures 22 years of life with 22 years of death to ask- what is the sense that can be made of that? 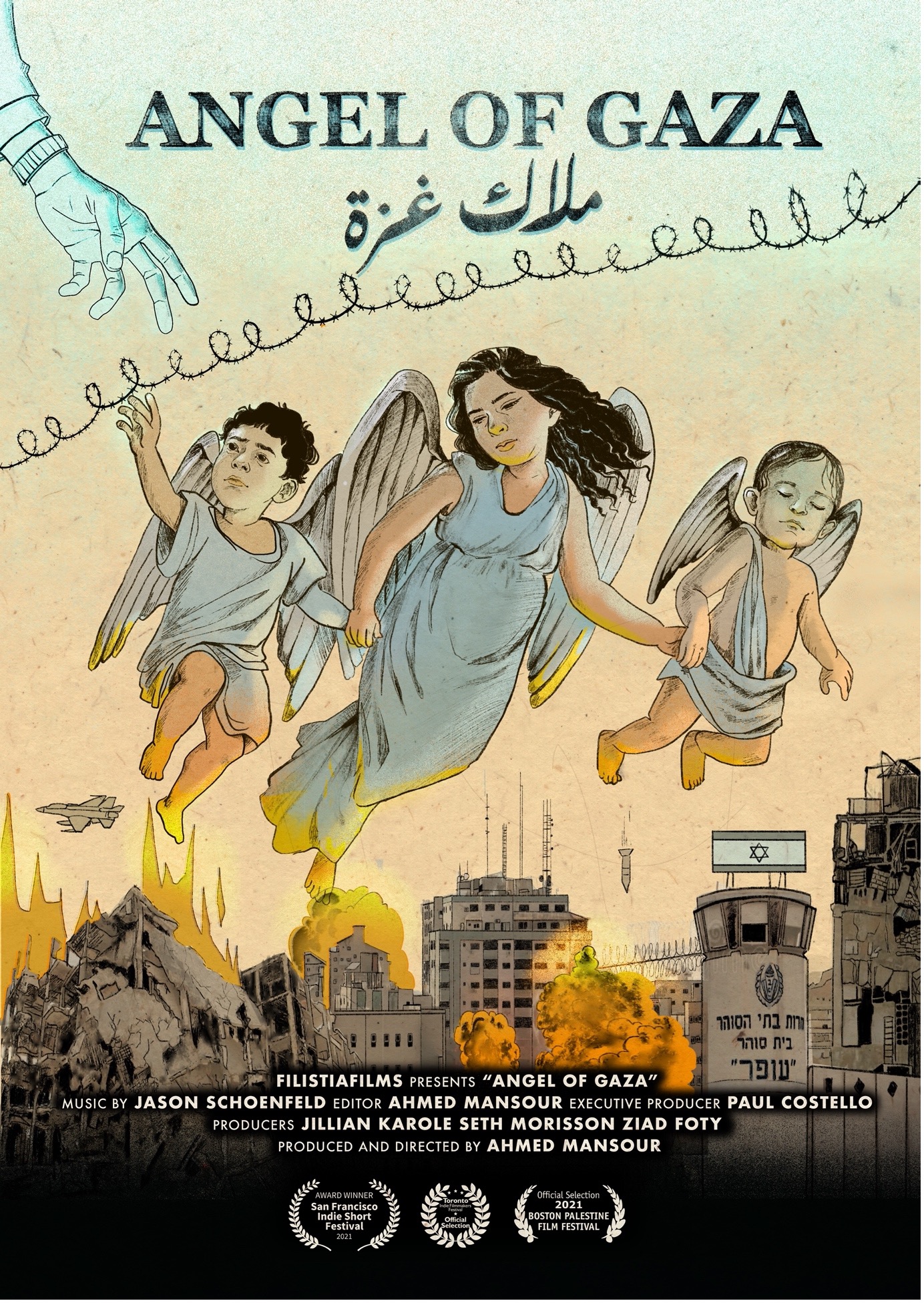 “Children,” the Whitney Houston song says, “are our future, treat them well” but if you are a child refugee or a young victim of war, you represent a future destroyed, denied or at risk.  The Gaza strip is home to one million children and growing up through endless wars, what can a child hope for. In this film, one of those Gazan children, eight-year-old Malak, (Arabic for Angel) takes us on her journey from what should be from despair to hope, from losing a home to gaining a new one, yet one that is so confusing for a child, so ambiguous and in the end, so contradictory.  At the same time as the USA is offering her family refuge, it is aiding the bombing of Gaza in renewed wars. Malak narrates the story of missing her father, first because he went to the USA for study, then because of Trump immigration bans, and finally to Israeli denials of reunion.  Dad cannot come home, and his family cannot rejoin him. Malak keeps a diary as a young girl, trying to make sense of an unwelcoming adult world. After 7 long years of waiting, she with her mother and brother, finally join her father in NYC and three months later, Israel is receiving aid from the USA to precision bomb Gaza.  Angel of Gaza is a close-up portrait of a Palestinian child from Gaza and the story of every child who has to grow up in a war zone. We all want the story to end with “happily ever after” like any child’s fairy tale. But Malak has to grow up fast and get used to a world where the word ‘home’ has been so hollowed out that it can only mean the next place you escape to, not necessarily the place you inhabit, or the place where you feel welcome. 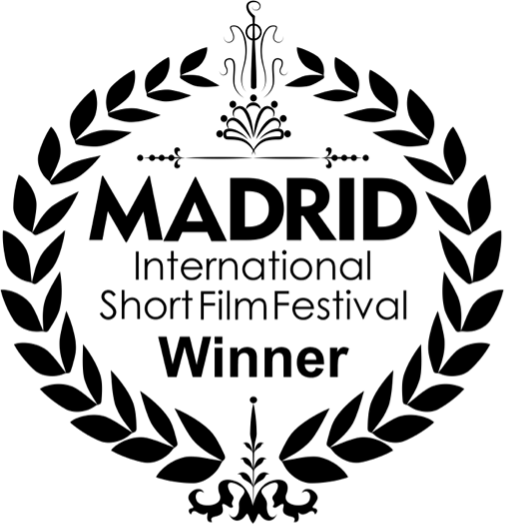 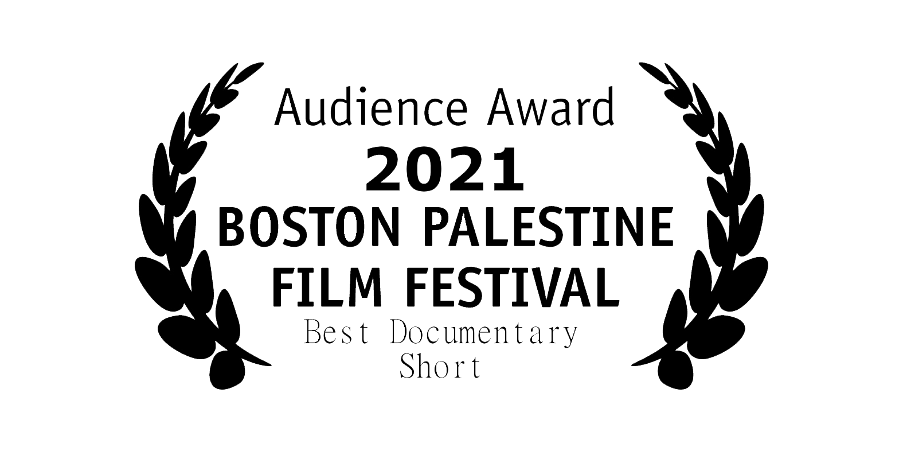 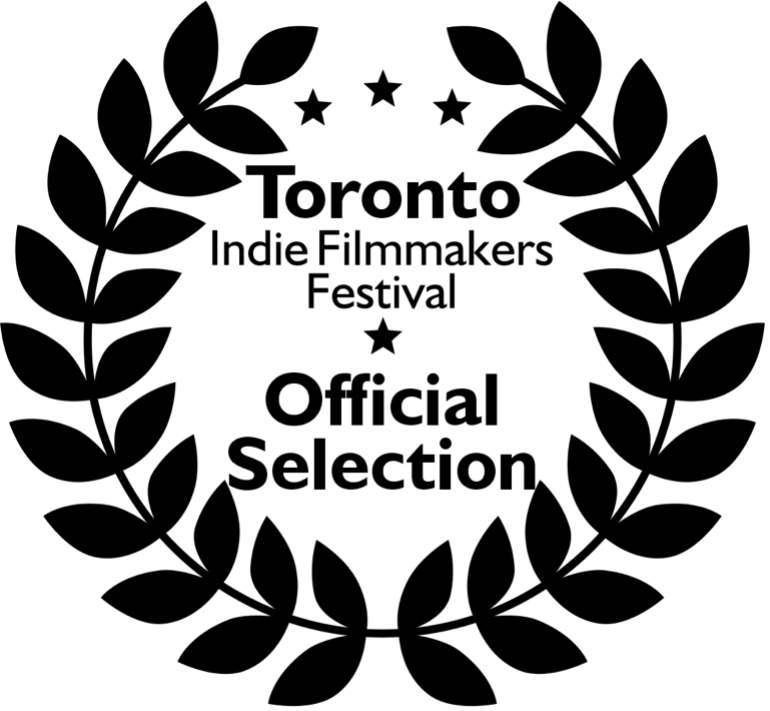 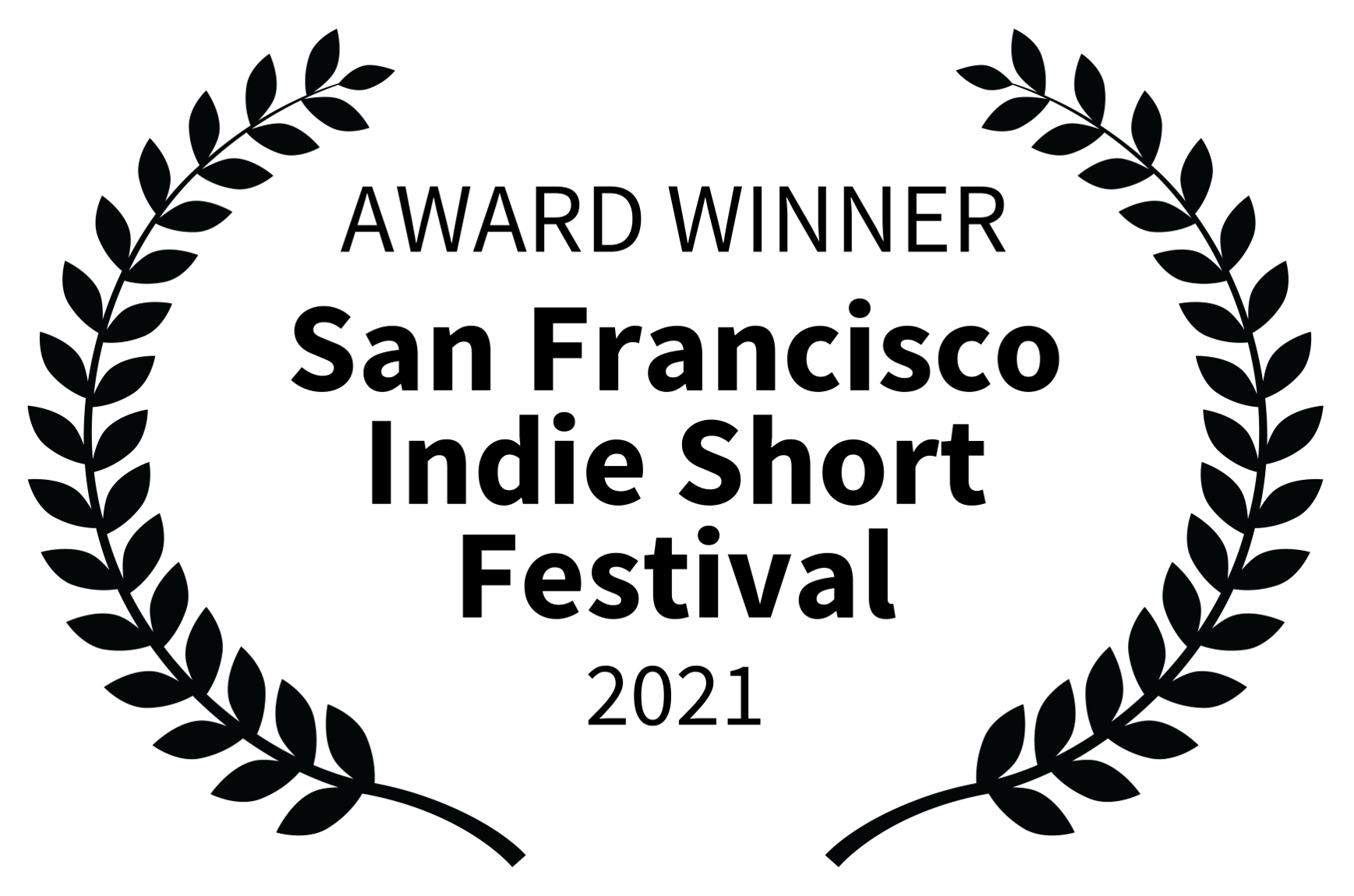 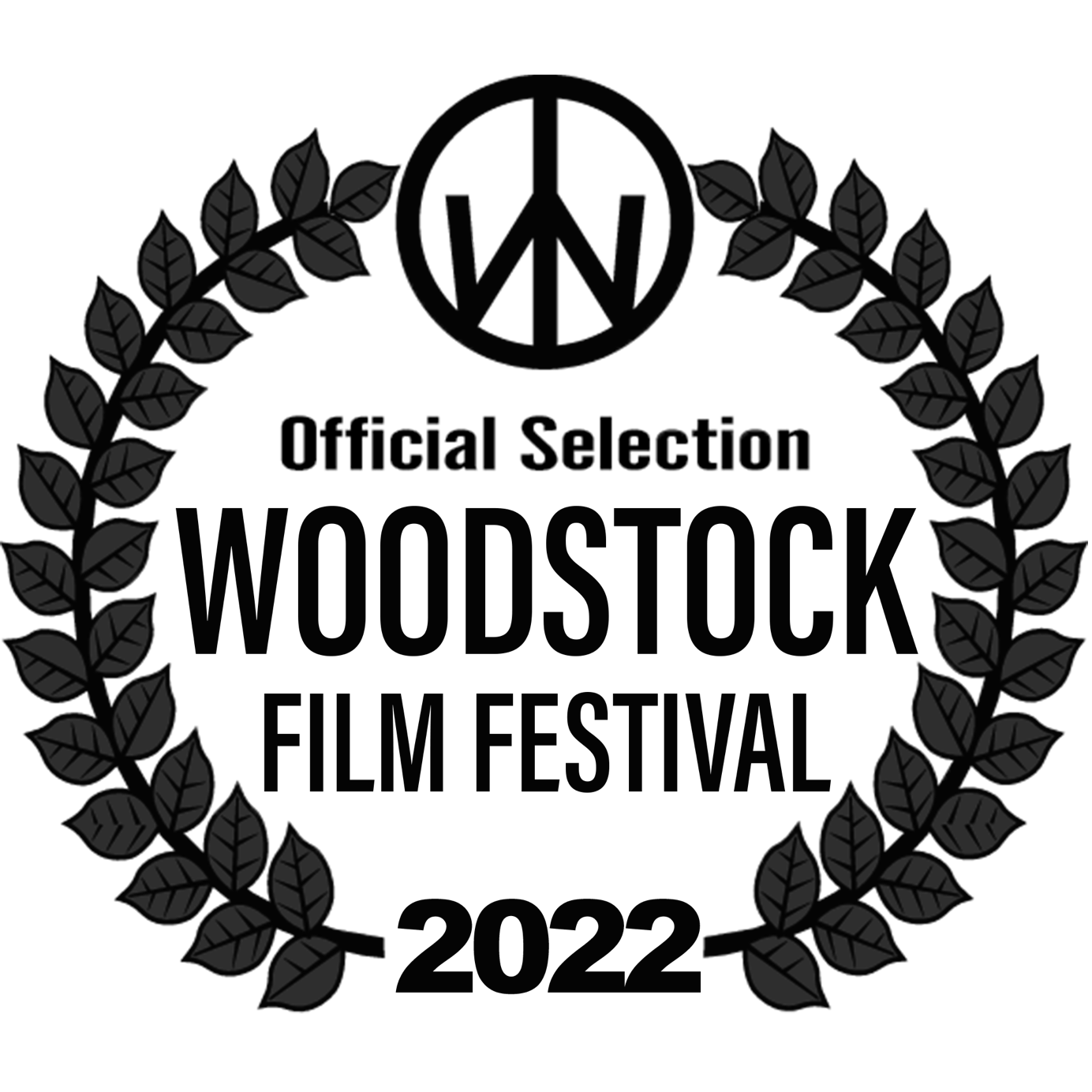